HOLZKEN VS GROENHART II WINS FIGHT OF THE YEAR 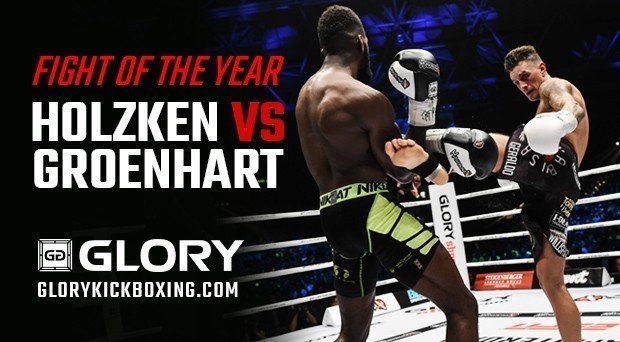 There were some real wars nominated for this award. GLORY Kickboxing is noted for having one of the highest finish rates of any combat sport and that is entirely down to the fact that GLORY fighters rarely take a backwards step. With two top combatants pushing forwards looking to end a fight early, it’s no surprise the action is never anything less than intense.

The winner of 2015’s fanvote was actually the very final fight of the year. Nieky ‘The Natural’ Holzken and Murthel Groenhart fought for the Welterweight Championship in a heated re-run of their 2010 encounter.

Plenty of trash-talk preceded the bout and there was added pressure due to it being the headline fight of GLORY 26 AMSTERDAM, the year’s marquee event. Both fighters wanted to make a statement and both of them rose to the occasion, pulling out every trick in their respective books over five rounds of fighting.

Groenhart put on a career-best performance and came within touching distance of taking the belt. He controlled the action for the first half of the fight and forced Holzken to dig deep. The champion used his clever setup game to land power shots and the result was one of the closest fights we have seen in GLORY.

By the end Groenhart had outlanded Holzken in total strikes but Holzken had outlanded Groenhart in power shots. GLORY rules award higher value to damaging strikes over strikes which are merely landed, which two of the judges felt was enough to award Holzken the win. The other judge felt that Groenhart had still done enough to win the fight and so the result was a split-decision in Groenhart’s favor.

Debate and controversy ensued, with both fighters and their respective camps feeling that they had done enough to deserve the win. Groenhart took the news stoically, but his disappointment was obvious. However, if he maintains that kind of form, a rematch in 2016 is surely not unlikely.