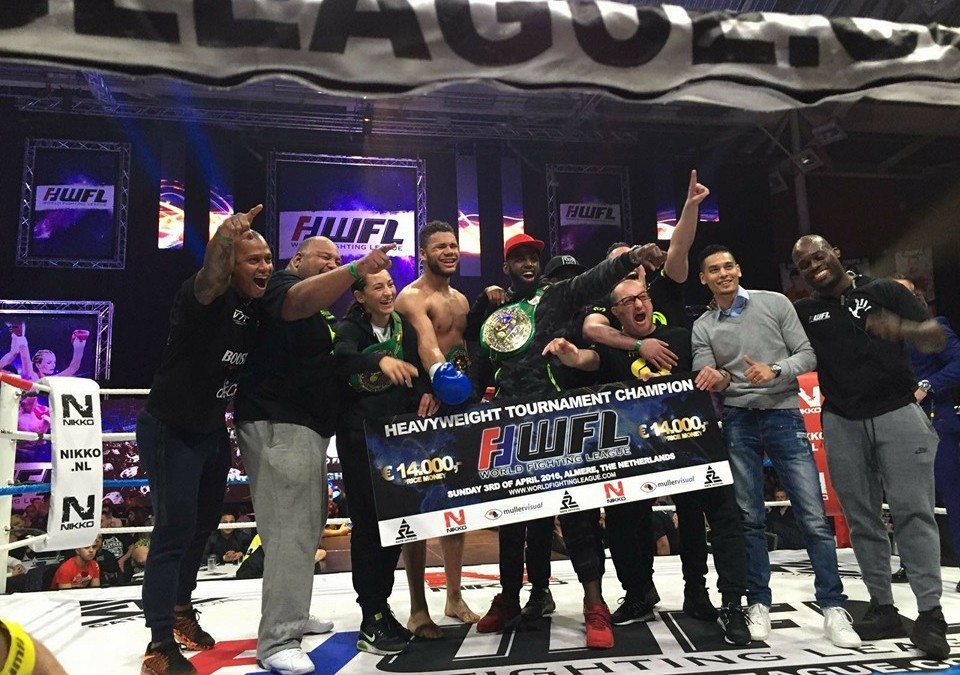 Yesterday Netherlands could rise up with perhaps the biggest kickboxing event of the year.

World Fighting League is already a good time doing by setting quality events with good matchmaking and where much attention is for entertainment and show. We at mixfight arrived around an hour or 15 o’clock when the event was already an hour going because the schedule had already begun. Our attention naturally went to the main card where three 4 man tournament on the program were combined with some super fights and the final piece of the farewell match of Andy Souwer, at least as a kickboxer.

If you ask many people at Mike’s gym, they will probably mention a number of names including Mike Passenier and fighters like Badr Hari, Gokhan Saki and to a lesser extent, Melvin Manhoef, who has his own gym in a while. Only what many people do not know is that Mike’s Gym currently has a stable of fighters that are very active and that Mike and his coaching staff as Oscar Roque, Walter da Silva, Melayno Gaddum and Soufian Lakradi fighters escorted around the world. There is every weekend to see Mike’s Gym fighter.

It was no different WFL, four fighters from Mike’s Gym were on the map which three fighters were in a 4 man tournament. So Anissa was in the women’s tournament, Murthel Groenhart in the welterweight tournament and late substitute Fabio Kwasi in heavyweight tournament. The women’s tournament had a favorite Ilona Wijmans who won her first batch of Daria Albers and Anissa Haddaoui defeated Sheena Widdershoven. In the final Anissa was too strong for Ilona and the first champion belt was Mike’s gym all take home. Although Ilona still took the microphone to say that with a broken hand in the tournament went Anissa could probably care less because she is the rightful champion of the evening. In the welterweight tournament favorite Murthel Groenhart joined in and had a heavy pot against the experienced Marco Pique just came a little more often and put himself in the final. In the other semi-final was Darryl Sichtman which took on replacement Shem Braan which two weeks ago received a call to replace Hesseling. It was therefore not surprising that Sichtman as a favorite in the race went and you saw back in the first round. In the two round tipped the ball Sichtman went into the game with Braan, a mistake that cost him the race because both round 2 and 3 went to Braan and thus knew surprising to reach the final. The final was a thrilling contest which Murthel started strong but as we see more of Braan, he fought in the contest. He seemed to get through into the two round with low kicks and Groenhart there must have suffered from. In the final round it was still Groenhart his experience ensured the victory. With a stunning KO in the last round it was another Mike’s Gym fighter who managed to write a tournament in his name.

The biggest surprise of the evening however was the 20-year-old Fabio Kwasi. He was also a late replacement for the heavyweight tournament and had to compete against Brian Douwes. Young Kwasi defeated handsome Douwes on points and seemed to come a step closer to a big stunt. In the other semi-final was the KO of the evening. After Sam had been first greased 8 seconds he came back into the game and he hit his opponent turn Marcello Adriaansz heavy knockout. The final between Kwasi greased and was a very exciting fight because after three rounds was chosen for an extra round this to the dismay of greased who was visibly disappointed to fight another round. While the young dog Kwasi true meaning seemed to have another round. There also arose some consternation when greased would not come out of the corner. Very strange that the referee did not give more rest than allowed grip and greased. Mike Passenier also complained go while Kwasi was ready. It seemed like a sign that Kwasi who was going to win round because it seemed that he was the extra round and therefore just wanted more and therefore rightly won the heavyweight tournament. A very clever and surprising performance of Kwasi but especially Mike’s Gym, who delivered a winner in all three tournaments. Yet it was not the perfect score for Mike’s Gym because rising star Massaro Glunder took on the chastened Mohammed el Messaoudi. Like Kwasi he was only informed two weeks in advance to fall, only a short preparation you did not see back in the game. He seemed to control the match in the first round and the second round he was the fighter who scored the most points. Only about 30 seconds for time El Messaoudi came through and Massaro had 8 Count cash and also lost with the round there. It was therefore El Messaoudi who got confidence from the knockdown and fought themselves back into the match and hence the decision could enforce.

After the heavyweight tournament final was time for battle where yet most people namely came from Andy Souwer the kickboxing farewell match against the very strong Mohammed Khamal. It was one of those games that stay with you for the two men came out strong from the start and fired one combination to another. Both men came through but it was Souwer who managed to finish the first round strong. The second round was wanted to give a copy of the first with two men on each other thumb width of space and it was a back and forth with quick and powerful combinations. The public was evenly divided and so both names were chanted by the hall and it seemed to motivate the fighters. At the end of the last round then at least the decision was made. Souwer came through and Khamal sent to the canvas. 8 count that followed immediately made the difference and Souwer was rightly awarded the jury decision. It was a great end to a great event. Everything was very well looked after and there was great attention to show. The intro of the main program was also very special with a great intro clip followed by the proposals of the fighters. It was clear that much effort has been put to it made a show spectacle again. A small criticism would perhaps be in the duration of the program. If you start at 14:00 and you’re only around 23.00 is ready to do a proper sit but then on the other hand will get you where so let’s hope for money WFL this year comes with a sequel.